Iam not a great fan of celebrity so Emma Watson Pilates Beauty? Really? But when it’s a mix of celebrity and Pilates then I like it more! The reason is that I think that any publicity for Pilates is good publicity if it is being practised in a positive way.

So today I will talk celebrity and specifically Emma Watson. We all know Emma from her role in Harry Potter, but she is now old older and playing the role of Beauty in Beauty and the Beast. She is not only older but she is also wiser as she includes Pilates in her regular workouts.

I hear all the time that celebrities are privileged and therefore should be in great shape, but this opinion is a little misplaced and is perhaps used by some as an excuse. My experience of celebrities that I have worked with is that they are totally dedicated and committed to their fitness regime which is all the more difficult as they have little time to fit it in. Yes, they have more money than us mere mortals but money does not buy health and fitness on its own. It buys trainers time for sure, but it still requires that commitment and dedication. Then there is the pressure of being in the public spotlight. Again people may say “well they get enough money for doing it” but once again whilst that is obviously true, there is also great pressure to maintain a public image which for many actors and actresses depends on their physical wellbeing. So it’s not all sunshine and rainbows.

Emma works out five times a week, and she loves it beacuse she says that it’s part of keeping her body and mind in a state of harmony and well-being.

The keys to her workouts are focusing on heavy cardio that includes sprint running, dancing, and Pilates. The actress loves to play tennis as well and she balances her spiritaul wellbeing by practising yoga.

In interview with the Examiner, Watson revealed that she’s accepted her body shape more as she’s gotten older. “I went through a stage of wanting to have that straight-up-and-down model look, but I have curves and hips, and in the end, you have to accept yourself as you are.”

Weight lifting is something she likes to do as well. She does it three times a week. Emma Watson also loves to go rock climbing whenever she visits a city with a rock climbing facility. Rock climbing requires a great deal of upper body strength and can help build and maintain muscle.

Watson’s diet is a non-diet as she refuses to fall into the trap of the Hollywood diet, or any fad diet for that matter. So she never diets, and chooses to eat what she wants to.

I like Emma’s attitude to her lifestyle and fitness. In PilatesEVO I teach that balance is everything and to achieve total health we must not only vary our physical workouts, but we must also include spiritual elements as well. That is why I teach PilatesEVO teachers about mindfulness meditation and Neuro Linguistic Programming (NLP) as part of the PilatesEVO system. I also teach meridians, mantras and of course lots of Pilates and functional training so PilatesEVO teachers can teach their clients real balance in their lives.

So is a celebrity doing Pilates really so bad? I think not if it get Pilates in the headlines and it gets people thinking about Pilates. We need to raise awareness and using famous people to do that is just common sense.

If you have any thoughts or comments then please share them with my by emailing me on chris@pilatesevo.com, or you can email the PilatesEVO School in Barcelona on evole@pilatesevo.com to ask about the educations we run there and our online training courses.

I’ve not seen the new Beauty and the Beast film yet, but I know that Emma benefits from regular Pilates in her life, so that to me is the most beautiful thing. 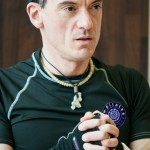 Chris Hunt is the creator of PilatesEVO and he travels the world training teachers and giving masterclasses and educations.

Sign up and always get notified of PilatesEVO latest news!